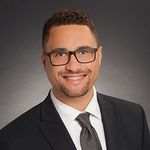 Paul Woodard was born in Milwaukee, Wisconsin, and spent his formative years living in the city and in a nearby suburb. Paul took his Midwestern values and upbringing with him when he moved to San Diego while in high school. While in San Diego, Paul completed his high school, college, and law school education graduating from Scripps Ranch, San Diego State University, and California Western School of Law, where he received the Dean's Diversity Scholarship. While in law school, Paul participated in a summer study abroad program at the University of Galway, Ireland.

Paul started working at Butterfield Schechter LLP as a file clerk, receptionist, and copy machine guru during his sophomore summer of college. Paul continued to work part-time during the school semester and full-time during the summers while attending San Diego State University. Following his first year of law school, Paul worked as a law clerk for the Butterfield Schechter LLP during each summer while attending California Western School of Law.

Paul counsels new and established small business clients with a range of services, including entity formation and documentation, business acquisitions and sales, partnership and business dissolutions, review, preparation, and negotiation of standard business documents such as vendor agreements, leases, and other business communications, as well as representation in dispute resolution or litigation.

Paul second-chaired a five-day bench trial involving claims of breach of contract and breach of fiduciary duty resulting in a successful decision on behalf of the client represented. The decision was upheld on appeal.

While an aggressive litigator and winning appellate practitioner, Paul is also versed in all forms of alternative dispute resolution including arbitration, mediation, settlement conferences, and adjudicatory hearings. Paul believes in working with his clients towards reaching a favorable resolution prior to incurring the expense of prolonged litigation or trial.

In the field of Tax Litigation, Paul handles disputes with the Internal Revenue Service (IRS) and Franchise Tax Board (FTB) at the audit and appeal levels. He also represents taxpayers in appeals before the California Board of Equalization (BOE) and United States Tax Court.

In the field of real estate law, Paul counsels individuals and businesses on purchases and sales of commercial and residential properties including negotiating the letter of intent, drafting and reviewing purchase and sale agreements, and assisting throughout the Escrow closing process. For businesses, Paul assists clients in negotiating and reviewing commercial lease agreement terms and preparing amendments and renewals to leases.

Paul meets with clients to discuss their estate planning goals and establishes a plan to effectuate their goals by drafting both simple and complex wills, trusts, deeds, and health care directives. Paul also drafts and reviews QDROs and performs complex QDRO calculations determining community property interests where several plans are involved and where plan include both community property and separate property contributions.