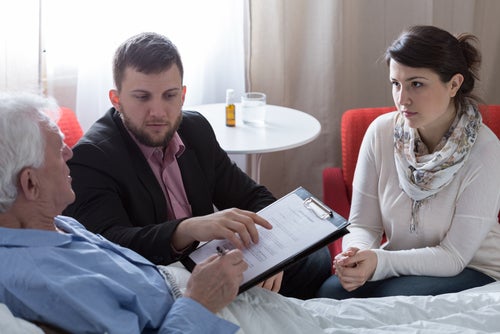 Bill Cornwell and Tom Doyle lived in a brownstone in the West Village of Manhattan for more than 50 years. Cornwell was the sole owner of the four-unit apartment building. However, about ten years ago, Cornwell wrote a will leaving all of his belongings to his partner Doyle, including the brownstone. Cornwell died in 2014 at the age of 88. Doyle expected to continue to live in the home they shared; however, he learned the will Cornwell prepared was not legally valid. Now, he has taken his case to court against Cornwell's descendants.

Cornwell and Doyle were artists who began living in the West Village in the mid-1960s. In those days, many parts of New York were crime-ridden and filled with dilapidated old buildings. Now the West Village carries some of the most expensive real estate properties in the country. The brownstone at the center of this inheritance claim is under contract to be sold for more than $7 million.

Cornwell's will provided that all of his possessions, including the three-story brownstone, would go to his longtime partner. However, under New York law, for a will to be legally valid, it has to be witnessed by two people. Cornwell's will was only witnessed by one other person. Without a valid will invalidated, Cornwell's assets are set to be distributed to his next of kin, in this case, two nieces and two nephews as Cornwell and Doyle were not legally married.

Under the California Probate Code, for a will to be valid, it generally has to be witnessed by two people. However, there are exceptions, including cases where a holographic will is written in the handwriting of the testator, or if clear and convincing evidence establishes that at the time the testator signed the will, they intended the document to constitute their will.

According to Carole DiMaio, one of Cornwell's nieces, “he had 50 years to put Tom's name on any of these papers.” DiMaio claims that because her uncle never took the steps necessary to legally pass the property on to Doyle, and never went through with a legal marriage, he never intended to give the property to Doyle after he died.

For most of the time Cornwell and Doyle lived together, same-sex marriage in New York was illegal. It was not until 2011 that New York passed the Marriage Equality Act. However, according to Doyle, around that time they'd purchased silver wedding rings but never got around to going through with the ceremony.

Lawyers representing the nieces and nephews claim they offered to let Doyle stay in his apartment for 5 years for $10 a month rent. He would have also received $250,000 from the sale of the building. Instead, Doyle says there should be no question that he is the legitimate owner.

Tom Doyle is now suing the nieces and nephews in Manhattan's Surrogate's Court. The Surrogate's Court handles probate and estate proceedings in New York. Doyle is claiming that he is Cornwell's common law spouse. New York, like most states, including California, does not recognize common law marriage. However, Doyle's argument is that Pennsylvania law should apply because the couple visited the state in 1991 to buy their dog Bingo, and Pennsylvania recognized common law marriage until 2005. Only time will tell how this situation is resolved by the courts. Nevertheless, this situation highlights the importance of proper estate planning to ensure your wishes are properly taken care of following your death.

If you have any questions about estate planning, creating a will, or whether a relationship may constitute common law marriage, contact Butterfield Schechter LLP. We will answer all of your questions and make sure your estate plan will provide for your loved ones and keep your best interests at heart. Contact our office today with any questions.